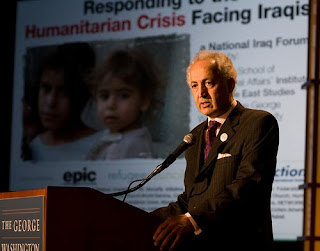 “In a state of war the environment is one of the first things that suffers,” Iraqi ambassador Samir Shakir Mahmood Sumaida’ie says to a room full of attendees. It’s not something I often think about when hearing of times of war. Instead my mind goes to broken towns, refugees, crying faces, and desert sands. I didn’t really know what the Middle East looked like before 9/11 and the invasion, but according to Shakir, agriculture was a huge part Iraq’s history. The country had a sophisticated system of irrigation which allowed them to sustainably farm and maintain their water sources.

After the coups, which lead to Saddam becoming the dictator, the country saw a steady decline in leisure time, women’s rights, and open information. The biggest ecological disaster occurred when people targeted by Saddam started escaping into the Mesopotamian Marshes (which some biblical scholars believe to be The Garden of Eden) of southern Iraq. For upwards of three thousand years, the marshes had sustained Iraq and been an important environmental asset. Much like the swamps of the south, the marshes were dense and people who managed to make it to them were difficult to find. So, Saddam had the marshes drained and poisoned, which set off a chain of ecological disasters. Many species were put on the endangered list and some went extinct. Birds that normally migrated there were forced to change their ways which had been the same for thousands of years. In 2001, only 10% of the marshes remained, but hope is on the horizon as the Iraqi people have been restoring it.

When a war is going on, nature truly does take a backseat. There are people going hungry who need to be feed, and there are people dying who need medical attention, but as soon as the war started to slow down the Iraqis’ were already working on saving their environment. We can really take a lesson from there. Although war has yet to come to our home front, our ecological well fare is not in the best state. There are some areas in the country where the water wouldn’t be considered drinkable, and the air quality causes asthma in small children. We have several luxuries that Iraq doesn’t have, yet the appreciation for nature and the ecological services it provides us isn’t fully there. Shakir and Iraq still wants our help in rebuilding their country. Hopefully we can work together and maybe their appreciation for restoring their environment will rub off on us, and we still start to do the same on our soil.

My name is Lia Rubel and I am …

Gardeners: our community needs you

There is no climate justice wi…