FOR IMMEDIATE RELEASE – CONTACT Anne Dillon, clerestory@madriver.com, (802) 498-8102
Free Film Screening Premiere of Multiple-Award-Winning Documentary: Breaking Their Silence: Women on the Frontline of the Poaching War, with a Panel Discussion to Follow
BURLINGTON, VERMONT, Oct 2, 2019 – Breaking Their Silence: Women on the Frontline of the Poaching War is a multiple-award-winning documentary told through the eyes of the dynamic women who risk their lives daily to protect Africa’s cherished wildlife from poachers. This is a hopeful and inspirational film that challenges its audience to become part of the solution. The panel discussion that follows the film screening will arm them to do so.
On Friday, October 11, 2019, there will be a free screening of Breaking Their Silence at the Main Street Landing Film House (6:00 P.M., 60 Lake Street, Burlington, Vermont), as part of a larger event hosted by the all-volunteer organization VermontForWildlife, with generous sponsorship from Main Street Landing.
Following the film there will be a panel discussion with the film’s director, Kerry David, as well as legislative champions of S.29/H.99 and local wildlife conservation experts who work globally on the ivory trade issue and the broader issue of the trafficking of wildlife parts.
The event is designed to draw attention to Vermont’s proposed legislative bill S.29/H.99, which would ban the sale and import of wildlife parts of 14 animal species—elephants, rhinoceros, giraffe, tigers, lions, leopards, cheetahs, pangolins, marine turtles, sharks, hippos, jaguars, whales, and rays. Successful passage of S.29/H.99 would include the outlawing of intrastate (within state) trade of elephant ivory, which sadly, unbeknownst to many Vermonters, remains legal in Vermont today because Federal laws don’t govern trade that takes place within a state. VermontForWildlife has worked tirelessly for eight years to see this pending legislation pass into law. If successful, Vermont would be the eleventh state in the union—following New Jersey, New York, California, Washington, Hawaii, Oregon, Nevada, New Hampshire, Illinois, and Minnesota—to ban the sale of ivory and other wildlife parts within state borders.
As featured on CNN and The Today Show, Breaking Their Silence has garnered national and international media and audience attention, winning the San Francisco Documentary Film Festival’s “Spirit of Activism Award,” New Haven Documentary Film Festival’s “Audience Award for Best Feature Documentary,” Silicon Beach Film Festival’s “Grand Prize Winner Award,” The Impact Docs Award “Award of Excellence, Documentary Feature,” and AFI Cannes Festival’s “World Peace Initiative Award,” among others.
For more information on this issue, please visit
VermontForWildlife www.vermontforwildlife.org/ and visit the event page on Facebook:
https://www.facebook.com/events/403216436960812/.
For more on the film, please visit www.breakingtheirsilence.com/. 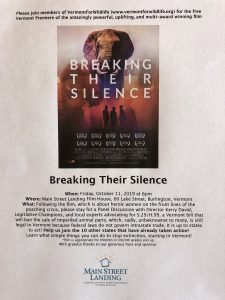 There are a number of events h…

Our friends at UVM have invite…

Virtual screening and discussion of Just Eat It – 12/17