Note: this is the next in a series of blog posts from our student-run Champlain College Publishing Initiative. Look for these and others as we bee-come more aware of our flying friends.

If you’ve been keeping up with our series of posts about honey bees, then you already know that their populations are rapidly declining, which is a major concern for the well-being of our planet. But the environment isn’t the only thing that could be negatively affected by this phenomena. We also need to consider the influence this could have on our economy. 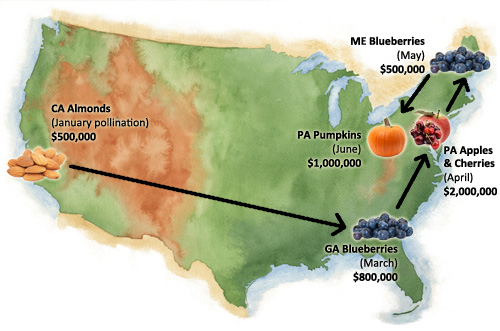 It sounds silly, right? Bees affecting the economy? But it’s very real — so real that even the White House has written a report on it! Pollination, primarily by honey bees, contributes over $24 million to the American economy every year. Commercially grown crops make up a significant part of our country’s gross domestic product, and without bees, a lot of crops just wouldn’t grow.

Some estimates actually say that a third of the foods we eat are pollinated by bees. Fun fact: bees are the only insects that can make food humans can eat! These foods include broccoli, asparagus, cantaloupes, cucumbers, pumpkins, blueberries, watermelons, almonds, apples, cranberries, cherries, and more. Basically, we’d be in a pretty tight spot if bees were to disappear.

Without bees to pollinate our crops, we’d suffer from major food shortages and the cost of food would ultimately skyrocket. According to an article by BBC, some insect pollinators in areas of China have already gone extinct and, in order to pollinate the pear trees in these locations, people have resorted to going around with feather dusters in attempts to replicate the process usually undertaken by bees. This, of course, would mean having to pay workers to perform this task. At minimum wage, experts estimate that the cost of the fruit would nearly double.

Bees are also involved in the production of honey, beeswax, candles, and other goods. Convinced yet? I hope so, because bees are pretty darn important. Between the environmental consequences and the economic influence they have, we really would be lost without them.

Learn more about our College Apiary.

Show us how you sort- take the…